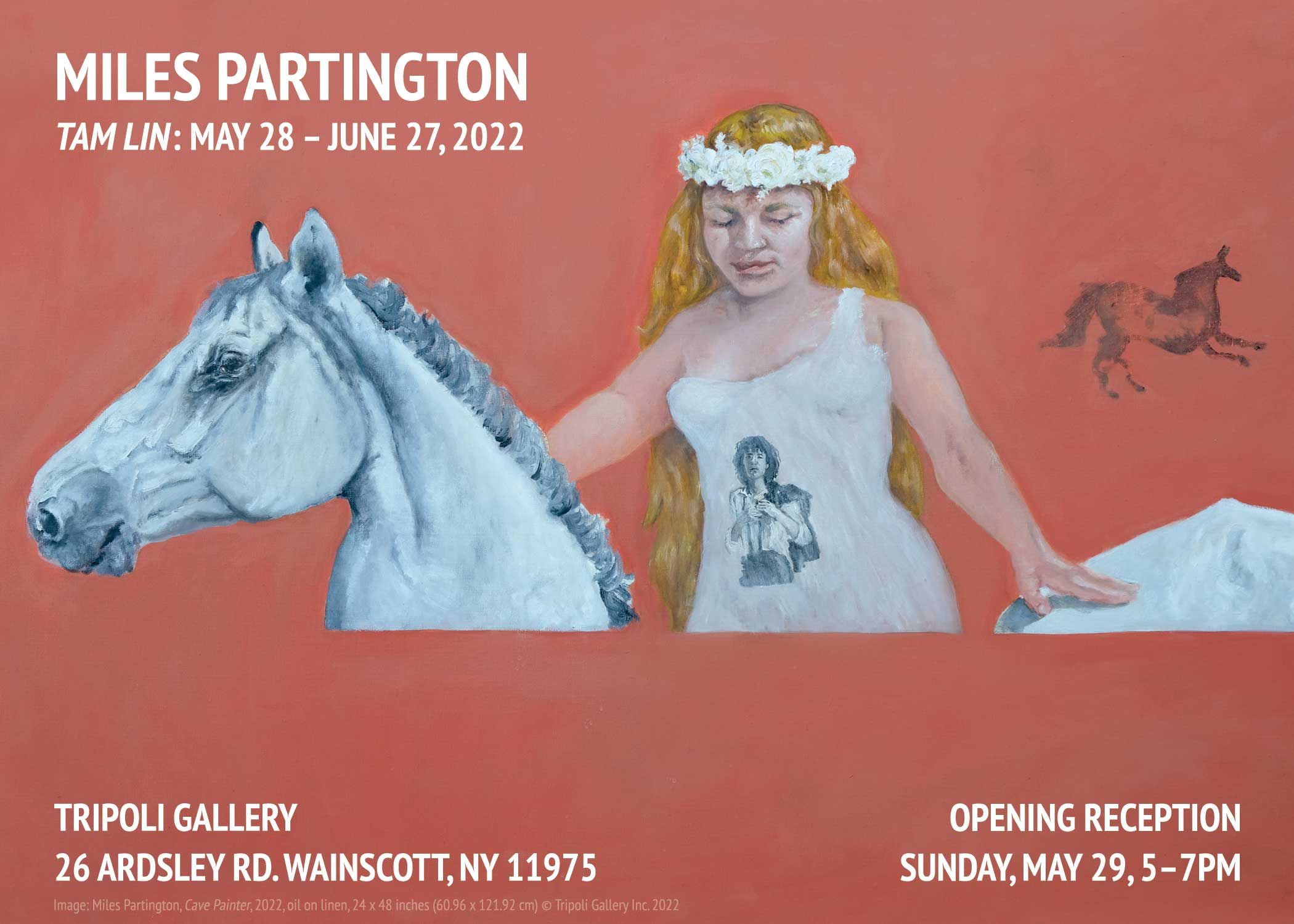 Wainscott, NY – Tripoli Gallery is pleased to present a solo presentation of new paintings by Miles Partington titled Tam Lin. On view from May 28th through June 29th, 2022, the opening reception will take place on Sunday, May 29th from 5 – 7pm at Tripoli Gallery in Wainscott, NY.

To experience Miles Partington’s work, is to enter a world that is as timeless as it is rooted in the present. Animals, his ever present subjects, are ubiquitous and anthropomorphic. His imagination emerges through his fingertips, whether sculpting or painting. Medieval knights are bisected by an unknown horizon line, melting away into the background of the canvas. There is a joust between two paintings, only evident by the lances their subjects yield, that break the edge of one canvas, only to be continued on another. In Tam Lin, it’s impossible to question the world present. It is so thoughtful and well executed, that it is believable. Why can’t an owl ride on the back of a horse? The horse’s body glistens as if after a long run, and an owl sits atop its back, solemn, unyielding, the moon behind its head, a halo.

The animal kingdom is much different from our own —outside of the urban city centers, unruly, not manicured. But Partington’s animal kingdom is somehow welcoming even if fantastical. The work in Tam Lin almost exudes a childlike wonder, if only it weren’t so well crafted. There is a strangeness and a precision to the paintings and sculptural forms that come with a skilled hand, repetition, practice, and even trial and error. In Seaford, Long Island, Seamans Neck Park not far from the Atlantic Ocean, is home to hundreds of beautiful emerald green Monk parakeets. The birds are native to South America, and it isn’t officially known how they ended up on the South Shore of Long Island, surviving and thriving. Seeing the birds fly from branch to park lights, perching high above the reach of children below, is surreal, but akin to Partington’s vision, that which is as likely as it is impossible.

Paint is applied to the surface with the utmost care and intention, Partington relies on representation mixed with the fantastical. His proportions, in one case a figure hiding behind an elephant on a farm, are incongruous but in the best way. The figure identified wearing a hat, has his arm around the neck of the elephant which appears quite small in comparison. The gesture is loving if not concealing, as parrots with red and blue wings outstretched, fly above in an early morning sky. A nearby building in this particular painting (After Unknown Artist, 2022), has dark brown paneling, and a pointed green roof, not unlike the barn where Partington has his Southampton studio. In the same place where peacocks, elephants, toucans, and knights roam, there is an artist waiting to bring his visions to life.

Looking at historical paintings by Delacroix, George Stubbs, Théodore Géricault, and Pieter Boel, Partington took liberties loosely referencing Lady Godiva and Joan of Arc, introducing them to a timeline all his own (including one of the heroines donning a shirt that features musician Patti Smith!). The title, Tam Lin, was derived from Scottish folklore about a mythical man, part fae, who wooed young maidens after they’d picked roses he declared to be his. Early versions of the story often in song, stem from 1549, and tell a tale similar to that of the Pied Piper. The story is said to have a moralistic component, warning humans of what could happen should they lay eyes on a fairy. It is a warning as much as it is a dream, an excuse to explore the unknown…never knowing what lurks between fantasy and reality. 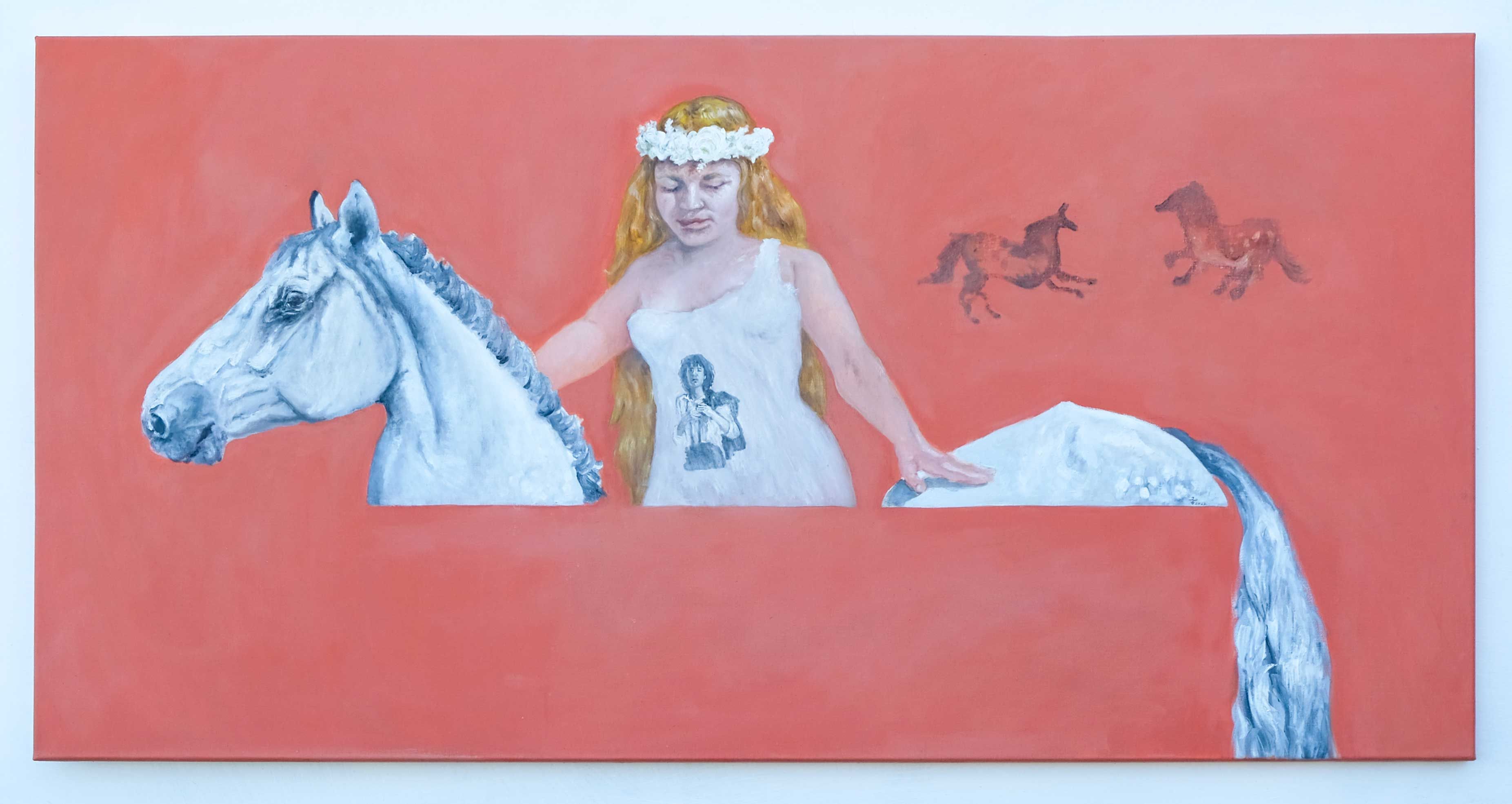